﻿How the mitochondria produces ATP in steps﻿

The production of ATP is called the process of cellular respiration. Cellular respiration is the process that releases energy in the form of glucose. Here are three steps before the ATP is created in the mitochondria. The first step is called Glycolysis. Then there is The Krebs Cycle and last there is the Electron Transport Chain before ATP is created. 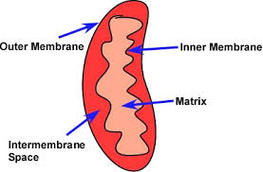 Electron Transport Chain
Lastly, there is the Electron Transport Chain process. This is the process that make the majority of the ATP or adenosine triphosphate. The Electron Transport Chain takes place in the inter membrane space of the mitochondria. This process can only function if there is oxygen available. The simplest way to understand this, is that it basically moves the electrons from high energy to low energy. In the end, this process can produce up to 32-34 ATP molecules from one glucose molecule. If you add all the ATP molecules that were created in the cellular respiration, it would be around 38 ATP molecules per glucose.
This is an video that shows how ATP is produced from all the processes.
Powered by